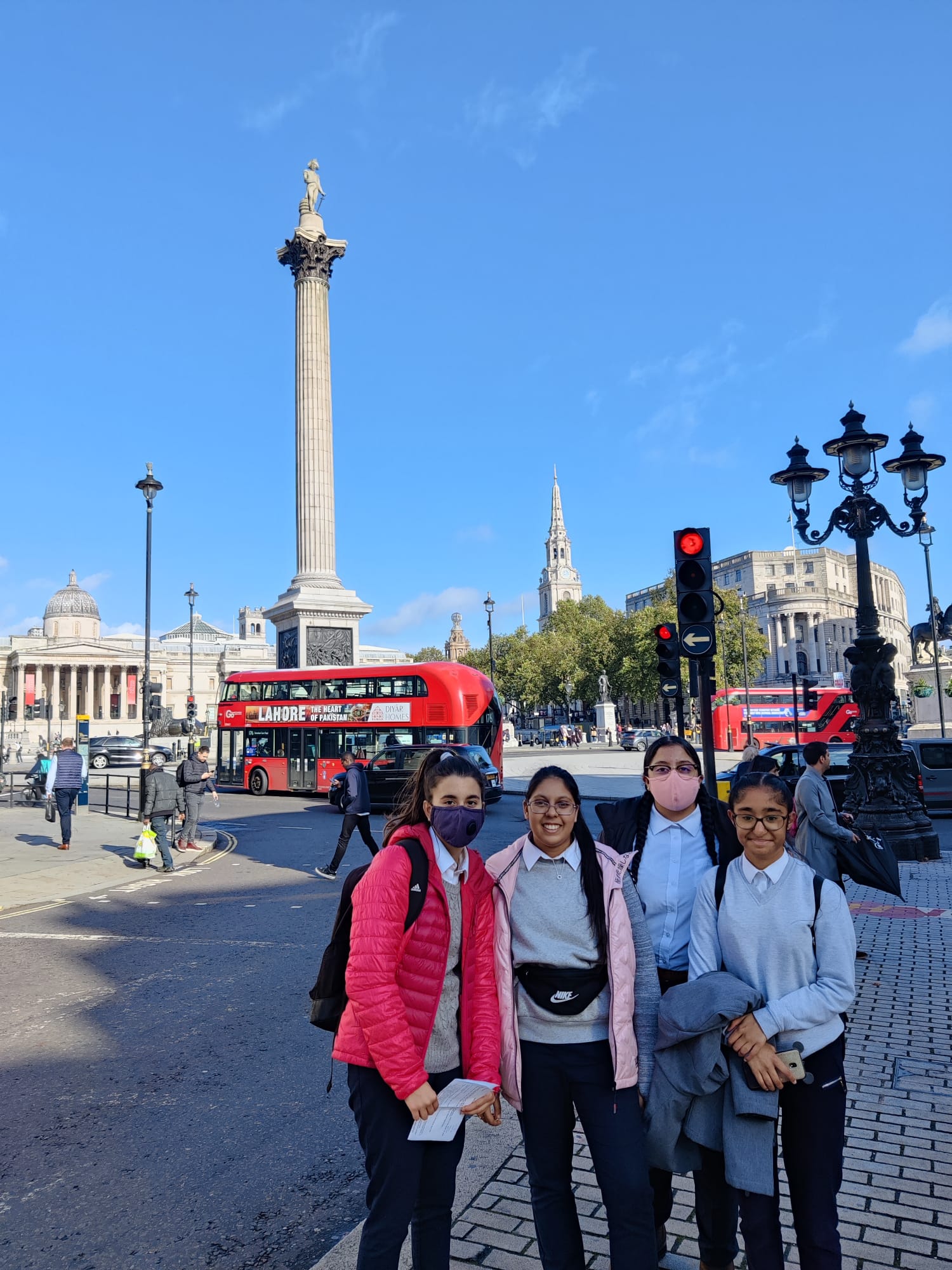 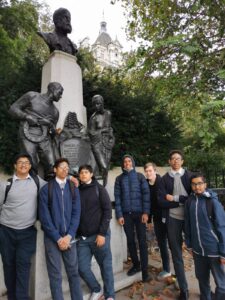 Our final week before half term saw Logic students engage in their 1st PBL week of the year. In PBL Week, we give students the opportunity to be off timetable and participate in a range of projects, activities and trips. The main aim is to develop their ‘Professional Competencies’, the key skills we believe they will need for their future but we also want students to have fun and develop their knowledge of the world in which we live.

As well as the different activities below, each year group also had the opportunity to undertake the London Scramble, a team treasure hunt in London focussing on the various landmarks of the city. This was a great chance for students to work on their problem solving and teamwork skills, while also developing their ‘Cultural Capital’ and knowledge of our capital city!

Our Year 10s worked together in teams to create a business idea from scratch to which they would pitch to “Dragons” in order to ascertain funding of up to £5,000. Students had to think of the brand name, logo, USPs, profit and losses as well as identifying unit costs for their potential products all whilst presenting their ideas to a set of dragons. We designed this activity for students to develop a range of soft employability skills as  well as linking to important parts of our curriculum such as Business, Creative Media as well as Maths and English; in particular, concepts that will be used in their end of year 10 exams in Business and Creative Media were brought to the fore. We believe that the numeracy (Maths) and oratory skills (English) gained could be applied into a potential real life situation.

As we start thinking about exams later this year, it is also time for students to consider their Post 16 plans and what they would like to do after Year 11. To support this, all Y11 students undertake a transition programme that looks at the different options available. This might include Logic 6th Form, a local college, an apprenticeship or something completely different. Our view is that students should make an ‘informed decision’ about their future so we make sure they know all the facts before making that important decision.

Year 11s spent the morning listening to an IOS app developer specialising in augmented reality, a manufacturing engineer from Rolls Royce, and an Architect based in Nigeria. They then put into practice their team work skills to design a unique app. We were impressed with their collaboration and creativity, ensuring a USP, monetisation and target audience. Their ideas ranged from a subscription based ‘cinema at home’ to an augmented reality space to hangout with friends, all as avatars. The students also used their logical thinking to investigate factors that kept their paper helicopters in flight for the longest and finally built towers using just 100g of spaghetti and 7 marshmallows. The winning tower was nearly 70cm high and freestanding!

As part of our school focus on developing oracy skills, Year 12 took part in a debate for the day. Students were introduced to the structure of Mace debating, as well as key terms and ways of writing speeches. Then, we introduced the motions of ‘This house believes that animals have the same rights as humans’. After fateful planning and research, students were assigned teams for the final debates. We had some heated and thoughtful arguments around animal testing, animal abuse, human intellect and much more!

The Year 12s spent the day integrating their Games Design, Digital Publishing, IT and Business (Marketing)knowledge together. They were given a project (ULEZ), and they needed to rebrand the current marketing campaign whilst developing their inter-departmental collaboration. Each student had a specific task to complete, and the project manager needed to ensure that all departments were positively collaborating and working together successfully. The Y12s developed their cultural capital, by learning about beyond Feltham, and had the opportunity to pitch their ideas to their peers to grow their public speaking.

The Yr 12 students spent the day in teams, each of which acted as a separate ‘country’ without any information about what to do. They had to work out what needed to be done and the only information that was given was the objective: To make the most amount of money possible. Countries compete against each other to ‘manufacture’ paper shapes (circles, triangles, rectangles, etc.) and sell them to an international commodity market trader at posted prices, which vary with supply and demand.

Students learnt a range of intra and interconnected links to a variety of subjects and cultural capital reference points.

The Y12s split into groups and spent the morning as “urban planners” coming up with ways to regenerate Feltham and make it an even better place for future generations. They had to problem solve and consider things such as budgets, environmental factors, land use and government policies in order to come up with new facilities in the area. Students did a fantastic and thorough job of planning and came up with brilliant new ideas such as a mental health centre for new people, turning the duck pond into a family friendly park with new facilities and new entertainment venues for young people and families.

They worked collaboratively to achieve their goal and developed confidence and oracy by presenting to staff at the end of the project.

Students were invited to create and design a showcase event which would promote Logics specialisms across the local community and across other schools. Ideas had to be well planned and all team members were expected to exemplify the logic professional competencies throughout the day. Students produced detailed plans that would enthuse others to take part and learn new skills, compete against other schools within innovative competitions and provided the structure in a carefully orchestrated way for the Logic specialisms to create intrigue in their planned activity. The level of focus and professionalism exhibited by the students was outstanding.

Starting a business from scratch in a day is perhaps a crazy idea, but that did not stop Year 13 throwing themselves at the project! Logic Design Lab has been set up as a new, in-house, design agency to provide graphic design and advertising assets to local businesses.

Students selected teams to be involved with on the day and were involved in all aspects of the start up. Some chose to look at designing customer relation databases and how we would target local businesses; others took on the task of outlining the businesses values and ethos. Branding for the company was established as well as a possible list of services we can offer.

Though this day is now over, the legacy will live on as we continue to develop the Design Lab during enrichment activities at the school, offering all students the chance to work for a real business. 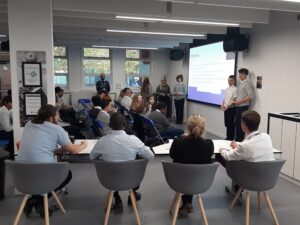 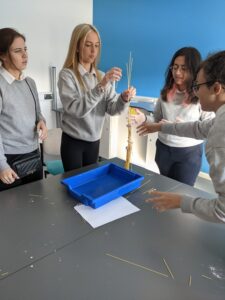 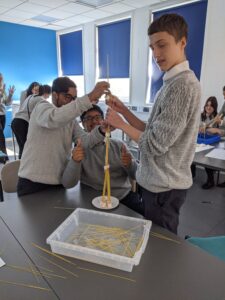 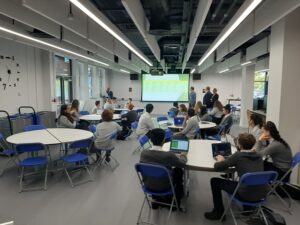 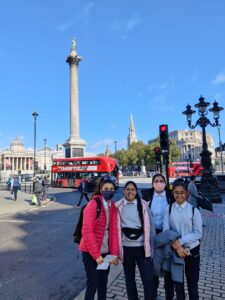